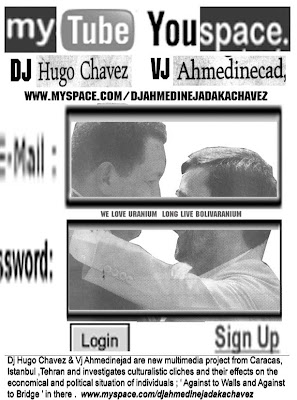 Dj Hugo Chavez & Vj Ahmedinejad are new multimedia project from Tehran,Istanbul, Caracas (first performance was on 17 th August 2006 Berlin) and investigates culturalistic clices and their effects on the economical and political situation of individuals; "Against the Walls and Against the Bridges" in there.

Dj Hugo Chavez & Vj Ahmedinejad Project focuses on media literacy, the
role of advertising and corporate power in our lives, intellectual property
issues and the evolution of art, law and resistance in a media-saturated
multi-national world and deconstructs Turkish films from the 60s and 70s and
the Ethnic Market and East-West gateway clich..s about Istanbul and Project
creates ANTI-CITY MYTHS and bizarre new forms similar to the kaleidoscope
effect with Middle Eastern Uranium and South American's Bolivar