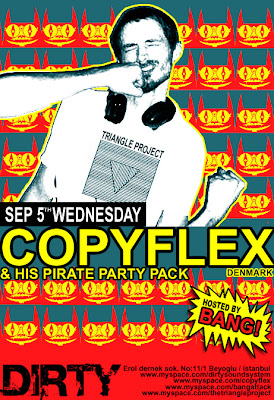 Copyflex is the alias used by Norwegian Åsmund Boye Kverneland. He works as a live musician, producer and dj. His main field of interest is that of club music based on noise and mashups – noises being a term indicating the ferocity of the sounds presented as music and mashups being the sample style, where one or several sources of music is combined into one composition.
With the heart connected to something that makes noises and other electronic distorted sounds is the output of Copyflex; danceable, upbringing and positive with noise Copyflex reach out and fondle the deepest fear of the human psyche in an energetic uprising and controlled way.
His field of expression varies depending on where he works, which has enabled him to be active in any setting. At the Istanbul Biennial, he will spend his first days collecting turkish music, both new and traditional and conduct interviews with the participating artists and locals.
He will also represent Colonel/Biennalist at the BM Suma Contemporary Art exhibition.
Posted by Jacob Fuglsang Mikkelsen on 8/22/2007