THE FUTURE OF PERFORMANCE ART (?)

Cyprus-born Stelios Arcadiou, known as Stelarc, is an Australian-based performance artist whose work “explores and extends the concept of the body and its relationship with technology through human-machine interfaces incorporating medical imaging, prosthetics, robotics, VR systems and the internet.”

He recently generated quite a controversy after having an ear grafted onto his forearm in the name of art. He said that his extra ear, made of human cartilage, is an augmentation of the body's form. Some surgeons questioned whether such an operation should have been carried out, given the absence of clinical need while some patients who had similar surgery to correct a birth defect said she found the artist's work offensive. 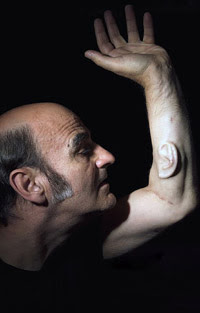 The blending of art and science is highly praised by the Raelians as the message given to Rael by his alien friends clearly state that all life forms were created by human beings who combined their advanced genetic understanding with a high artistic sense.
“If life had been created by scientists only, it would be functional and grey” said Rael in one of his recent addresses to students. This is unfortunately perfectly illustrated by the comments of these surgeons from the British Association of Aesthetic Plastic Surgeons who are questioning the ethics of the operation, arguing that operations should only be performed for “obvious clinical or psychological benefits”.
Well one might ask; an ear on the arm...is that a earm?
Posted by Jacob Fuglsang Mikkelsen on 11/05/2007