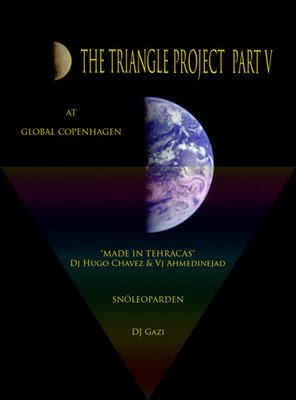 The Triangle Project continues the quest to create interaction and exchanges between Istanbul, Copenhagen and New York.

This time around Dj Hugo Chavez & Vj Ahmedinejad
has been invited, along with Snöleoparden, DJ Gazi and Claus Ankersen.

"A multimedia art project from Tehran & Caracas investigating culturalistic clicés and their effects on the economical and political situation of individuals; "Against the Walls and Against the Bridges".

Gazi Peker is a Kurd from Turkey living in Denmark, being the first Kurdish/Turkish/Danish artist playing electronic music. In early 2008 he released his debut CD named "Kismet". The music is in the electronica / ambient genre with an ethnic dimension.

The Danish spoken-word artist Claus Ankersen, who just came back from a longer stay in Istanbul will also perform during the evening.