In connection with The Triangle Project collaboration with INKONST on April 5th, there will also be a performance at Inkonst's theater space. 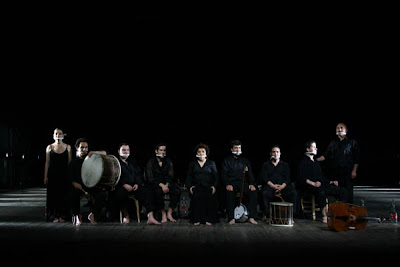 Dressed in simple black attire, they roam on the stage, lost and alien, through the fragile borders of a labyrinth of bottles, accompanied only by age-old restlessness and by ancient chants.
Ashura puts on stage the relationship with the “other”, the neighbour, aggressiveness, the domination of cultures, the adventure of exile, the tragedy of migration. It is the story of Anatolia, a region in Turkey that was once multi-lingual and multi-culture, where the large monotheist religions cohabited, met and clashed: a 20th century land reduced to socio-cultural standardisation. 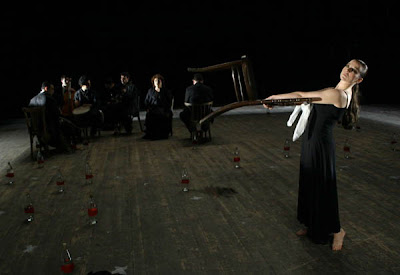 But what makes this “stage concert” exciting is how Mustafa and Ovül Avkıran have succeeded in creating a meta-historical narration by bringing together traditional dance with gleanings of contemporary theatre, ritual movements with demographical statistics, sacred voices with profane uttering. Harmonising the whole with music: songs whose common denominators are the rhythmsand modes of folklore, but from which chants in Copt, Armenian, Hebrew, Zazaki, Turkish, Kurd and Greek rise, thanks to perfectly pitched voices that are very different in terms of style, like those of Sema and Harun Ates, the famous Turkish contralto.

“Ashura” is the dish Noah prepared after the deluge. For various reasons, the day of the Ashura is a religious recurrence for Jews and Muslims, for Armenians and Zoroastrians. “Its name is as old as the history of man,” Avkıran explains. “It comes from the past to show us that the routes of exile are today on the move”. 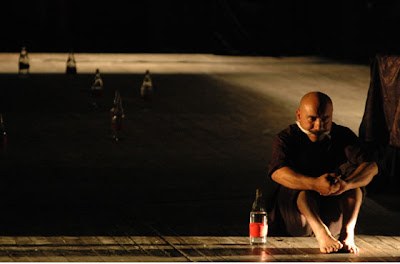 Mustafa Avkiran was born in 1963 and is a theatre director and actor.

Ovül Avkiran was born in 1971 and is a choreographer, dancer and actress. In 1995 they established 5.Sokak Tiyatrosu (Theatre of the fifth street) that is today one of the most acclaimed Turkish companies on the international scene. 5.Sokak Tiyatrosu is the founder of “garajistanbul”, a newly established contemporary performing centre in Istanbul.
Posted by Jacob Fuglsang Mikkelsen on 2/09/2008